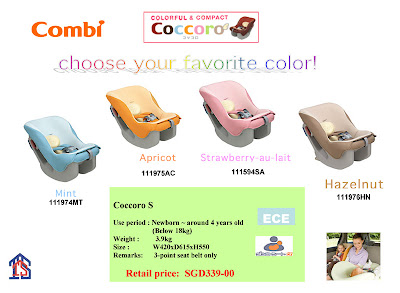 I was too embarrassed to take pictures in the store or while installing ... I'm not generally one to care but it was just awkward today. Etta was having an especially "floppy" day and I wasn't prepared for the stares while I worked with her and the seats. ("floppy" = low tone and very slouchy) I've been on the search for a shorter RF seat. I have MAs to date and while I love them I can't see well enough to the right side of my car. I've been in a side impact crash in the past and am so jumpy about having blocked vision.. also, we are a very bicycle friendly town and I NEED to make sure I can see the cyclists (I live off of a very popular riding street) with extreme ease. So, I saw the Coccoro in person and LOVE it... I was so hoping to hate it as I know it will not be the seat to take me to the optimal limits - but it's so perfect for today and at least another year RF. And, I'll always have the MA when it's time to move up (and, it will be easier in a year to have the girls crawl into their MA ERF... so I can move the seats to the back row of the van and avoid the whole blocked vision issue then) but the cost for an interim car seat. Oh why does it have to be such a great seat . It feels so nice and sleek and cushy without going overboard (I wasn't using the infant insert) and the harness adjuster was very easy with my DD in it. Easier than the MA. But, hands down - the MA is much simpler to install. Not that the Coccoro was challenging, it just wasn't as straight forward as a MA. My low-tone/hypermobile DD, Etta, fit like a gem in it - I didn't realize she could be supported so well. The MA is nice but she ends up slouching a lot. The support she has in the Coccoro is enough for me to justify buying HER the seat... but not her twin sister. My only excuse to buy two is that I want them to coordinate I also tried the Scenera. It did take up less height than the MA. But my heart is completely with the Coccoro and I'm having a hard time looking back. Even switching to a RA seems silly because I'm sure Etta will have the same slouching issue. I still want to try the TF and an Avenue and am calling to find a local store for tomorrows adventure. I played with a MR and wasn't as impressed as I had hoped to be (it was a contender for my older DD). For fit: Etta is 20lbs even, and 29.75". Her torso appears to be near 12" (slightly under). In a MA she is flush with the first slot and in the Coccoro she was flush with the second slot from the bottom.