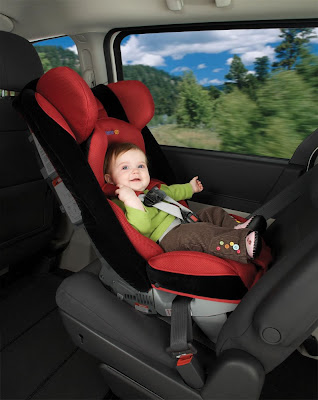 Due to the recent advice from the American Academy of Pediatrics to keep children rear-facing until their second birthday, rear-facing capacity has gained some renewed interest.

Sunshine Kids has recently completed additional crash testing and Radian's rear-facing capacity has been increased to 40 lbs. The Radian seats meet all the rear-facing crash test performance standards in FMVSS213, even at 40 lbs (Note: such performance is not required by law for RF seats above 22 lbs). As well, Radian seats were successfully NCAP crash tested (35 mph / 47 g's impact force — almost twice the forces — compared to 30 mph / 25 g's impact in FMVSS213 crash tests). This new change will be reflected in new manuals later in the year. In the meantime, please note this increased rear-facing capacity is now retroactive to all U.S. model Radian seats made after September, 2008. 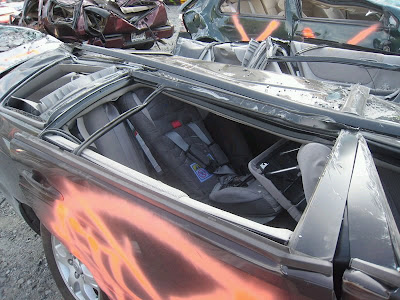 SUMNER, WA – July 8, 2009 – Last week’s freak collapse of the five-story Centergy parking deck in Midtown Atlanta left onlookers, bystanders and victims alike stricken with awe as it was revealed that not a single person was harmed in the crumble that damaged or destroyed a total of 38 vehicles.
But for Sarah Maglione, whose vehicle was among those destroyed, the spectacle had only just begun. Her SUV was parked on the structure’s second level when the incident occurred; it was the thirtieth vehicle pulled from the wreckage. "I had three floors of a parking garage collapse on top of my car," Maglione said. "It is flattened beyond belief." The particular that astounded her further: the fact that her child’s car seat, a Sunshine Kids Radian65 positioned on the passenger side of the back seat in her SUV, completely withstood the force of the collapse and upheld its section of the car, as well.
"Amazing," Maglione said. "That thing did not bend an inch," referring to her Radian65 car seat. "They are built using steel alloy frames, and I always heard they were the strongest. Now I know it."
Radian®, by Sunshine Kids Juvenile Products, is constructed with an exclusive steel alloy frame for superior impact protection. Seven-inch-deep, high-impact-grade engineered sidewalls reinforced with EPS foam provide superior side impact protection, absorb crash energy and protect the child from intrusions making it the strongest car seat available. Radian is a convertible car seat built to protect children between 5 and 65 pounds.
Click here to learn more about the Sunshine Radian Car Seats.
Posted by Moderator at 5:01 PM